My first pastorate was a small rural congregational church. Her only doctrinal statement was the Apostle’s Creed. The ol’ timers said it was because doctrine didn’t matter out in the country. I served that congregation while in my last year of college and almost all three years of my seminary career.  The summer I received a call to that church I became persuaded that Calvinism was simply a shorthand way of describing the Bible’s message of salvation.  Not everyone in my new congregation was thrilled about my turn toward Reformed soteriology (i.e. the doctrine of salvation).  So, it should have come as little surprise when I received a packet in the mail one day.  It was filled with polemics against Calvinism.  It was plain nasty. So much for theology not mattering in the country! But there was one item in that packet that I have to this very day. It’s a cartoon about the circumstances surrounding Calvin and Servetus. A cartoon of the event seems almost callous.  Let me tell you the story.[1]

Michael Servetus believed that reformers like Martin Luther, John Calvin, Bucer, Farel, and others were not reformed and reforming enough and he saw it as his calling to correct that error.  So, at twenty one years of age he published De Trinitatis Erroribus in which he attacked and denied the doctrine of the Trinity calling it a deception of the devil.  Servetus believed that he might draw some notable reformed theologians into debate and thus create the radical reform for which he aimed. However, all he felt was pressure to retract his position, which he did in a second edition.  However, his retraction did not appear to be truthful.

Nevertheless, though he continued to teach his spurious theology he did not put it in print but instead decided to take up medicine.  In France, he achieved quite a notable reputation writing books and giving lectures. But Servetus had a quarrelsome personality and it wasn’t long until he made a nuisance of himself among the medical community in Paris.  He seems to have been always looking for the extreme position no matter the field.  In medicine, he apparently believed that knowing astrology gave the doctor the upper hand and he was not shy to belittle his colleagues for their lack of starry knowledge. Not surprisingly, Servetus had to leave town.

What also seems to emerge from a study of his life and character is an obsession with John Calvin. Sometime after 1540 Servetus wrote Calvin at least thirty letters. He was apparently seeking to engage Calvin in a Trinitarian debate.  He even asked Calvin if he wanted him to come to Geneva. Calvin ignored the letters but he did write to tell Servetus that he did not want him to come to Geneva.  Servetus must have felt rejected once again.  No one seemed willing to engage his extreme views.  So, apparently in exasperation, he sent Calvin his Restitutio, which had been secretly published in 1553 because it revealed his heretical views.  Thus, Calvin had, in hand, proof that Servetus had never forsaken his anti-Trinitarian heresy.

On August 13, 1553, Servetus was spotted in Geneva. Someone told Calvin and he reported the sighting to the authorities. Servetus, who had escaped from a jail in Lyons, was to be shipped back to France for trial in that city. However, Servetus begged to be tried for heresy in Geneva.  His apparent desire to make a name through controversy knew no bounds. His request was honored.

The Council at Geneva found Servetus guilty and sentenced him to be burned at the stake. Throughout the trial Calvin went to Servetus and repeatedly attempted to convince him to recant of his heretical statements, but his attempts failed.  Calvin also sought a less painful death for Servetus from the Council but he failed there as well.  It’s little wonder that Calvin did not attend the burning of Servetus, which was also botched.  The fire would not stay lit and it took the man no less than thirty agonizing minutes to expire.

Now, this story is surrounded by rhetoric but the facts are available for all to read.  So, how the death of Michael Servetus can be laid at the feet of Calvin is somewhat mystifying and yet it is. What is more, those who oppose Calvin behave much like the caricature they have drawn of him!  I am obviously not saying that Calvin was perfect – he was not.  However, to lay the death of Servetus at Calvin’s feet is simply to read the evidence of history through an anti-Calvinistic lens and that is not good history. Come to think of it – it’s not very gracious either.


[1] This story can be found in Calvin biographies.  There is Bruce Gordon’s Calvin, Herman J. Selderhuis’s John Calvin: A Pilgrim’s Life, Ronald S. Wallace’s Calvin: Geneva and the Reformation, and T.H.L. Parker’s John Calvin: A Biography.  There is also a cartoon which shall remain nameless. 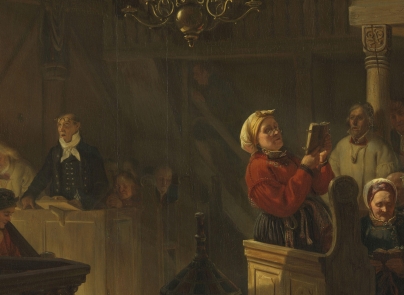