Discovering Christ in the Psalms

Athanasius once made the following statement about the book of Psalms: "While the entire Holy Scripture is a teacher of virtues and of the truths of faith, the book of Psalms possesses somehow the perfect image for the soul’s course of life." The Psalter has a unique place in Old Testament revelation in that it really is a sort of miniature Bible. Every systematic and biblical-theological truth of Scripture is found, in seed form, in the Psalms. It should not, therefore, surprise us that the New Testament writers cite the Psalms more than any other book of the Old Testament. Neither should it surprise us that, in each citation, Jesus and the Apostles teach us that the Psalms are Messianic in nature. In so doing, they teach us the principles that we must follow as we seek to discover Christ in all the rest of the Psalms.

While theologians have taken a variety of approaches--in an attempt to teach principles of biblical interpretation regarding Christ in the Psalms--one of the most helpful approaches is that which we find in William Binnie's Pathway to the Psalter. In his chapter, "A Classifications of the Messianic Psalms" (pp. 178-196), Binnie suggested that all of the Psalms fall under one of the following categories of Messianic interpretation:

1. Typical Messianic Psalms Binnie noted that David's "history from first to last, was a kind of acted parable of the sufferings and glory of Christ." In this way David was a type of Christ. It is not hard for us to see this in the narrative of the life and ministry of David. He was a shepherd from Bethlehem, chosen by God to be King of Israel. He was first cast into an experience of humiliation (when Saul sought to destroy him) prior to entering into a period of exaltation as King. David, like the Son of David, had a betrayer who--when he discovered that his plot had been uncovered--went and hung himself. David faced off (and defeated by himself), as a federal representative of his people, the seemingly unbeatable enemy of the OT church; Jesus faced off (and defeated by Himself), in federal representation of His people, Satan--the great enemy of the church. The covenantal typology that exists between David and Jesus is so great that Ezekiel prophecies 4 times of the Messiah using David's name synonymously with that of the coming Messiah: "David My servant shall be king over them, and they shall all have one shepherd..." (Ez. 34:23, 24; 37:24, 25). Clearly Ezekiel does not have David in view--rather, he is referring to David's greater Son. All of this is organically bound together in the Covenant promises that God gives to David (2 Sam. 7). Some of the Psalms speak of the typological nature of David and some of other Old Testament figures. For instance, Psalm 110 says that Jesus was "a Priest according to the order of Melchizedek." One hardly need to investigate this, as Melchizedek is plainly set out as a type of Christ in the book of Hebrews. There are times that the Tabernacle, Temple, sacrifices, Priests et al are referred to in the Psalms. As was true of Melchizedek, the book of Hebrews explains that all of these things we typical of Christ and the heavenly realities that Christ bought into this world in His first coming. Since a type is any person, place, thing or event that points beyond itself to a greater and more full anti-type, we see that the Psalms are full of typology. When the Psalmist speaks of the altar (Ps. 26:6; 43:4; 51:19; 84:3; and 118:27) how can we not see this as a reference to that which was typical of the cross (i.e. the altar) where our Lord Jesus was sacrificed for us (Heb. 9-10)?

2. Directly Predictive (Prophetic) Psalms. The second category of Messianic Psalms that Binnie sets out are those which he considers to be directly (and exclusively) predictive of Christ. While discussing Psalm 22, Binnie explained: "The only adequate and natural interpretation of the psalm is that which sees in it a lyrical prediction of the Sufferings of Messiah and the Glory that was to follow. No Sufferer but One could, without presumption, have expected his griefs to result in the conversion of nations to God." While I have read many commentators who attempt to see this first and foremost about David, I have always tended to agree with Binnie that this Psalm is exclusively about the sufferings of Christ. No different than Isaiah 53, this Psalm is directly predictive of Christ. Though David suffered often throughout his life, it is hard to see how the details of this Psalm--that includes at least 5 references to the 7 sayings of Christ at Calvary--as having reference to David. The Psalm is divided into two very clear parts--the sufferings of Christ (vv. 1-20) and the glories that followed (vv. 22-31). What seals the exclusively Messianic nature of this Psalm is the fact that the benefits of the sufferings of Christ are set out in vv. 26-31. In addition, the writer of Hebrews cites v. 22 in Heb. 2 and tells us that  that was speaking of Christ as the Mediator and heavenly worship leader of His church. All attempts to make this partially about David (or even typologically about David) are vain.

3. Mystically Messianic Psalms. Recognizing that there are Psalms in which David is clearly speaking of his personal Christian experience, Binnie suggested that there are many Psalms that would be classified as "Mystically Messianic Psalms." The two examples of mystically Psalms that Binnie gives are Psalm 16 and 40. By virtue of the believer's union with Christ, he shares in similar experiences and benefits from the saving work of Christ. Though Peter tells us that those famous words of Psalm 16:10 could only be understood at that point in redemptive-history as referring to Jesus in the resurrection (Acts 2:23-33), they will also be shown to be true of all those united to Jesus by faith in the day of their own resurrection. This class of Psalms is not always easy to interpret, precisely because some of what is written in the Psalm may only be true of Jesus in redemptive-history, and yet will be applied to believers in the consummation--while other parts of the Psalm are true of the believer and of Christ in the days of their earthly pilgrimage here. I would add to Binnie's three categories two others:

4. Psalms of Trust in Christ. There are many other Psalms in which David is found confessing sin, crying out for deliverance and speaking of his own trust in God through trials. Clearly we cannot apply to Christ those parts in which David confesses sin. Some may suggest that because Jesus becomes the sin-bearer by imputation we can see this as typological of Christ (as is true of His being circumcised and undergoing a baptism of repentance); however, this seems somewhat unnatural at this point in redemptive-history. Rather, we should see David's experience in the confession of sin, the cry for salvation and the trust he professes in God as possible only because of the work of the coming Redeemer to whom David looked by faith (Acts 2:30-31). There could be no evangelical repentance without the Gospel of the Old Testament. David was one of the saints of the Old Covenant that understood that the promises, types, shadows and ordinances pointed beyond themselves to the coming Christ. In this way, we must speak of "Psalms of Trust in Christ."

5. Creation/New Creation Messianic Psalms. One final category of Messianic Psalms is discovered in the pages of the New Testament. When working through the book of Hebrews we find references to several "Messianic Psalms of Creation/New Creation." For instance, Hebrews 1:10-12 provides for us the hermeneutical principle for this category. The writer sees in Psalm 102:25-26 a statement of creation and new creation--then explicitly applies it to Christ. Jesus Christ is both the Creator of all things (John 1:1-3; Colossians 1:15-16; Heb. 1:2; etc.) and the One who secures the new creation through His atoning death and resurrection. The writer of Hebrews develops the idea found in Heb. 1:10-12 when he cites Psalm 8 in Heb. 2:5-9. Here again, we see how the goal of the creation that Christ created finds its consummation and restoration in the saving work of Christ. When approaching other "Creation/New Creation" Psalms we must look for clues in the exegesis of the Psalm. For instance, Psalm 104 is clearly a Psalm of creation. At first glance it does not seem to having anything explicitly Messianic about it; but when we start to consider the flow of the Psalm, and the details contained in it, we see something striking surface. After setting out God's glory and providence in creation (vv. 1-30), the Psalmist puts his own redemptive praise to God in it (vv. 31-34). Finally, he cries out, "May sinners be consumed from the earth, and the wicked be no more." The Psalmist understands that the way of this fallen world is not the way of God's original or ultimate design for creation. The world that is full of God's glory and care should be filled with righteousness. The solution to the problem is only to be found in the saving work of Christ. One day, the wicked will be consumed from the earth." Jesus cleansed His own people from their wickedness and will banish the unbelieving from this world. In that day, only those who have been redeemed by Christ will dwell in the "new heavens and the new earth wherein righteousness dwells."

Here is the audio of a class that I taught on this subject with a development of this subject and an expansion of the categories above.

*This is an adaptation of a post that first appeared at Feeding on Christ. 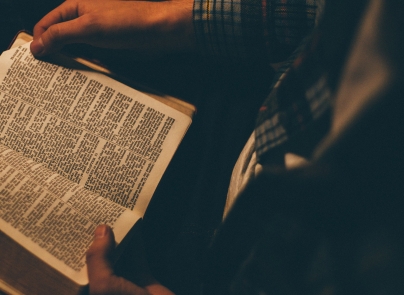