The Reason to Give Thanks

I was in a store just a couple of days ago when a smiling clerk asked if she could help my wife and me with some pictures we were admiring.  However, talk about beautiful pictures gave way to a less than attractive reality.  When we were finished, we asked where she would spend Thanksgiving.  That’s when she invited us to see behind her smile.  After the death of her last living parent, the family had fallen apart.  To add to her misery, she was also experiencing financial hardship.  By the time we were finished talking, the clerk was in tears and we said good bye with an embrace, some help, and a word about Christ.

Days are difficult but holidays can be even worse.  For example, holidays like Thanksgiving encourage us to reflect on our blessings, count them one by one.  But for some, the exercise is a discouragement and the first utterance brings only tears.

So, let me speak into your Thanksgiving for just a few minutes. I want you to know that there is a reason to be thankful.  Listen to what Paul wrote to the Romans in chapter 6:17-18.

“But thanks be to God, that you who were once slaves of sin have become obedient from the heart to the standard of teaching to which you were committed, and, having been set free from sin, have become slaves of righteousness.”

These people had been slaves to sin but something happened.  A change occurred. Somewhere along the line they had become obedient to God from the heart.  Now, that’s wonderful!  They had turned to God in faith and the fruit of faith was obedience from the heart.  Joy!

However, this raises an important question.  If this change originated in the Roman Christians, if the change was their doing, then why thank God?  In other words, why not offer self-congratulatory praise for having keen insight and wonderful spiritual sensitivity?  Well, we need to go a bit further in the text to see the source of this heart obedience.

Take a look at the verse.  It’s true that they were once slaves and had become obedient to God from the heart.  However, the text clearly tells us why these people had become obedient from the heart.  They had been delivered, committed or handed over to a form of teaching which shaped their behavior.  Something happened to them. They were acted upon.  The source of the change came from without and God was the active agent in the work.  He handed these people over to life in His Son wherein they might enjoy freedom from sin and death.

This is the work of the simple Gospel.  It has the power to set you free from despairing thoughts and being a prisoner of your feelings.  There is only one needful thing.  You must look to Jesus and believe in Him.  And believing you will have not only salvation but a pattern for living in the midst of life’s sorrows.  The author of Hebrews tells us that Jesus, for the joy set before Him, endured the cross, despising the shame, and is seated at the right hand of the throne of God” (Hebrews 12:2).  Thankfulness is possible in the midst of difficulty but you must look to Jesus to see the reason. 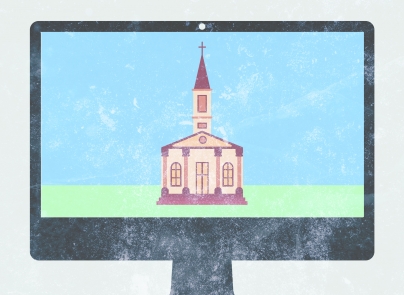 4 Predictions for the Post-Pandemic...