Jesus’ exaltation hinges on his bodily resurrection from the dead. The conquering of death by Jesus demonstrated that he is the Son of God (cf. Rom. 1:4) and all subsequent acts of his exaltation are because he has conquered sin and death. Do we recognize, however, how these matters of Jesus’ resurrection and exaltation are united to and experienced by sinners in the preaching of the gospel?

As Paul wrote, “. . . if Christ has not been raised, then our preaching is in vain. We are found to be misrepresenting God, because we testified that he raised Christ, whom he did not raise, if it is true that the dead are not raised. For if the dead are not raised, not even Christ has been raised. And if Christ has not been raised, your faith is futile and you are still in your sins. Then those who have fallen asleep in Christ have perished. If in Christ we have hoped in this life only, we are of all people most to be pitied” (1Cor. 15:14-19).

The bodily resurrection of Jesus from the dead is united to both 1) the effectiveness and content of apostolic preaching, and 2) the power and purpose of the Christian’s faith.

It might surprise some Christians that the Bible places a great importance on the relationship between Jesus’ bodily resurrection, his exaltation and the effectiveness of the preached word of God, and not merely the content of what is preached. You see, Paul is not merely saying that if the resurrection of Jesus did not happen, then to preach that it did would be to pass on incorrect information. While he does make this point, he also affirms that the apostolic preaching lacks the power of, and for, new life, if in fact there is no living, reigning exalted Jesus active in that preached word.

The term translated vain means not merely lacking truth but power. Paul used it in 1Cor. 15:10 when he wrote, “But by the grace of God I am what I am, and his grace toward me was not in vain.” Paul has in mind the issue of power. This is made abundantly clear in the next part of the verse: “On the contrary, I worked harder than any of them [the other apostles], though it was not I, but the grace of God that is with me.” God’s saving grace is God’s power of new life that does not merely raise a sinner from the spiritual dead (our regeneration & conversion) but is the power of new life energizing that sinner in his or her sanctification and therefore discipleship. Note what Paul then stated in 1Cor. 15:11—“Whether then it was I or they [the other apostles], so we preach and so you believed.” This verse is the concluding verse in what we can consider the first main section of 1Cor. 15. It summarizes the point that Paul introduces in verse one: “Now I would remind you, brothers, of the gospel I preached to you, which you received, in which you stand, and by which you are being saved, if you hold fast to the word I preached to you—unless you believed in vain.” Clearly, Paul has the gospel and its preaching on his mind in this portion of the letter.

This gospel that Paul and the other apostles preached is the power by which sinners are being saved. The gospel is not an inert idea. It is not even merely an idea. No! The gospel of the Lord Jesus Christ is the power of God for salvation to everyone who believes it (Romans 1:16). That cannot mean that the sinner’s belief in the gospel causes the gospel to have power. After all, that would mean a spiritually dead sinner was giving the power of life to the gospel—an absurd notion if there ever was one!

You see, in 1Cor. 15:14 Paul stresses the union between the resurrection of Jesus, apostolic preaching and the Christian’s faith. Their union is about the issue of the power of, and for, life. Need we state the obvious? Jesus coming back to physical life from the physical dead is about the power of his eternal life. Paul’s point is not merely that his and the other apostle’s preaching is about Jesus and his resurrection, but that Jesus through his resurrection created them as apostles and preachers, and that Jesus remains active through his Spirit in their preaching of him. Through the apostolic preaching about Jesus, the resurrection power possessed by the exalted, reigning Lord Jesus is present and given to those chosen for eternal life (cf. Romans 10:14-17). 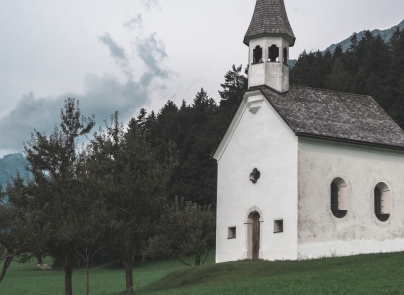 No Christianity without the Church