Prayer Tips or Learning from Screwtape

C. S. Lewis has been a helpful guide to many Christians and rightfully so.  He has led countless weary travelers through the world’s wasteland in order to introduce them to the Christ of Christianity.  And though his defense of the faith is well known and respected through works like Mere Christianity, he is also a helpful counselor to those already in the faith.  I think for instance of his¸ The Screwtape Letters. The book is just that, a series of letters from one devil to another, which explore the psychology of temptation from the other side.

Screwtape, the senior devil is the author of all thirty-one letters. The recipient is a junior devil who also happens to be Screwtape’s nephew.  The letters are entertaining but more they are insightful and provide us with the inner workings of the world of temptation that we would do well not to neglect. However, it is the fourth letter in particular that catches our eye.  There Screwtape introduces what he calls “the painful subject of prayer.”

We are well advised to hear Screwtape’s counsel to his nephew and apprentice, though obviously for us taken in the reverse!  For example, and first, Screwtape is concerned with how Wormwood’s patient thinks about prayer.  The old devil challenges young wormwood to persuade his patient to avoid the concrete and instead “to aim at something entirely spontaneous, inward, informal, and unregularised; and what this will actually mean to a beginner will be an effort to produce in himself a vaguely devotional mood…”[1]

For Screwtape, the important thing is to keep the patient “trying to produce feelings.”[2] In other words, when the person bows to pray for love, says Screwtape, let them, instead start trying to manufacture feelings of love.  When they pray for courage let them spend time trying to feel brave.  In so doing, says Screwtape, you “teach them to estimate the value of each prayer by their own success in producing the desired feeling.”[3]

But there is a second weapon of the evil one meant to derail our prayer life. According to Screwtape, though God pours out self knowledge to his people “if you look into your patient’s mind when he is praying, you will not find that.”[4] In other words, you will not find what God has revealed about himself but instead you will find images derived from paintings, or the upper left hand corner of one’s ceiling or a crucifix.  But, says Screwtape, no matter what it is you must keep him praying to it and not the person who made it!  But why do we do this? Why do we have things in mind when we pray?  Screwtape answers in a most troubling way.  He says that most humans do not desire God as much as they suppose they do.  He says, “There’s such a thing as getting more than they bargained for!”[5]

Surely there are some lessons to be learned here that will undoubtedly help us with the very problems Screwtape points out.  First, set time aside for prayer. It is fine to pray throughout the day.  In fact, according to Paul, we must pray without ceasing!  But we must also set time aside to be alone with God.  Second, we must be sure that it is God with whom we are alone.  So, begin by acknowledging who God is by reading a passage from the Bible about Him.  For instance, Exodus 34:6-7 might be a good place to start.  And finally, pray aloud.  Speak to God. That will keep you from distraction and drift.  And once you start talking to God you may find the relationship you’ve been longing for!

Jeffrey A. Stivason is the pastor of Grace Reformed Presbyterian Church in Gibsonia, PA. He also holds a Ph.D. in systematic theology from Westminster Theological Seminary in Philadelphia, PA.  Jeff is the author of From Inscrutability to Concursus (P&R), he has contributed to The Jonathan Edwards Encyclopedia (Eerdmans) and is the Senior Editor for Place for Truth. 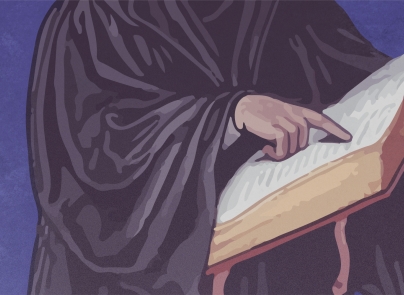 The Bible Is Reliable